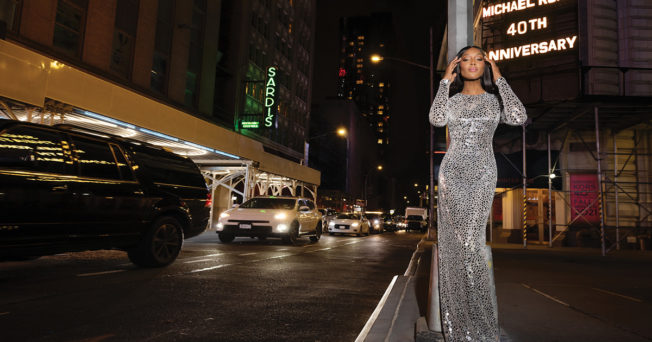 The show must go on, even after a global pandemic.

Luxury fashion brand Michael Kors held a 40th anniversary runway show with the drama and pizzaz an event like this deserves.

According to Michael Kor’s instagram, the show was “all about the joy of getting dressed and stepping out on the town.” New trends were showcased amongst a backdrop of lit up marquees of the classic Shubert Theatre and Music Box Theatre. The lights were lit up for the first time since last spring, when global pandemic COVID-19 forced Broadway to shut down.

The models walked through West 45th Street before entering the Shubert Theater, where they watched Grammy-nominated American-Canadian baroque-pop singer Rufus Wainwright perform a medley of New York based songs including “City Lights,” “New York State of Mind,” and “There’s No Business Like Show Business.”

A host of supermodels from all eras of fashion walked the runway, including Naomi Campbell, who closed the show. Other models featured include Bella Hadid, Liya Kebede, Precious Lee, Dilone, and Paloma Elsesser.

In terms of style, the show featured both strong, sleek tailoring in work wear as well as strong, opulent glamorous dresses. Both styles had Kors’ signature timeless and classic styling. The show put emphasis on the fashion public’s desire to get dressed to go out on the town, a much-missed activity since the beginning of the global pandemic.

The brand’s namesake and designer, Michael Kors, is a New York City native. He described the night as his “fantasy night out” on the brand’s instagram.

In support of the theater industry, Kors made a personal donation to The Actors Fund, a human services charity that supports individuals working in the entertainment industry. The organization most recently gave emergency financial assistance to performers out of work due to the global pandemic. The brand itself, Michael Kors, also made a donation to the organization.

A video was released featuring Kors speaking on his love of theater and his decision to donate to The Actors Fund.

“So many of the incredible artists that make up Broadway have been devastated by the shutdown the pandemic has caused,” described Kors. “So I’m here today to give back to a group of people who have given me so much, and who have been really struggling since COVID began.”

Also in this video, a pre-recorded collection of celebrities and artists, including Bette Midler, Rosario Dawson, Renee Elise Goldsberry, Jane Krakowski, Alan Cummings, Sutton Foster, Judith Light, Kristin Chenoweth, Sara Bareilles, and much more, lined the walls of Sardi’s, Kors’ favorite theater restaurant, in a cheeky ode to Zoom video conferencing. The actors congratulated Kors on his anniversary as well as asked viewers to consider donating to The Actors Fund.

Michael Kors as a brand was launched in 1981 at Bergdorf Goodman, forty years ago. The brand has become a style and culture powerhouse, with the brand having a market cap of around $200 billion, according to Forbes.